Solar power is versatile and readily available almost anywhere. The explosion of solar panel technology has not only made it possible to power homes and enterprises with abundant, clean power, it has opened new horizons for smaller scale applications such as gadgets and consumer goods. Integrating innovative design, utility, and often extreme portability, these are some of the incredible solar-powered products that have sprung from the solar revolution and challenged the boundaries of invention.

The Immortus by Australian start-up EVX Ventures is said to be the world’s very first solar-powered sports car. The car is covered in a shell of solar panels measuring eight square metres and powered by a lithium battery. The car features special ‘solar racer’ tyres that minimise rolling resistance, and the car can clock speeds of up to 160 kilometres per hour with battery power. With just solar power, the car still manages to reach an impressive speed of 80 kilometres per hour.

The Immortus weighs just 500 kilograms, less than half the weight of a standard sedan. The low mass-to-power of the car and its aerodynamic design has its manufacturer describing it as ‘a car of practically infinite endurance’ that has no fixed range that theoretically can be driven forever.

University student Antoine Sayah invented the Beachill for a class project when asked to invent something useful and environmentally friendly. The result is a lightweight mat with a five-watt solar panel and in-built fridge that keeps your drinks cold. You can also charge your phone while you relax on the padded mat, which comes in a variety of colours. Shortly after posting his idea on his Instagram account, Sayah attracted attention from buyers all over the world and sold dozens of prototypes for $150 each.

MIT researcher Daniel Nocera has invented a potentially revolutionary storage technique powered by water and sunlight. Inspired by the photosynthesis process of plants, the Artificial Leaf uses solar power to create hydrogen and oxygen from water. The resulting gases – chemical fuels – are then stored in a fuel cell for later usage. The ‘leaf’ is actually a solar cell made from silicon, and it does not need any external parts to work. It starts generating power when placed in a container of water and exposed to sunlight. Nocera expects commercial applications within a few years.

Although still in the testing phase, SolarWindow is a new and promising product that could allow glass-based structures such as office towers to capture solar power from windows. These solar windows are coated with a transparent film lined with tiny solar cells capable of generating solar energy. Made from polymers, the film can be applied at room temperature.

If you like to be mobile while you work, Logitech’s wireless solar keyboard can free your from both wires and batteries. The thin (1/3 of an inch thick) keyboard features 2.4GHz wireless and gets power from both outdoor and indoor light, so you can choose to work inside or in the great outdoors. 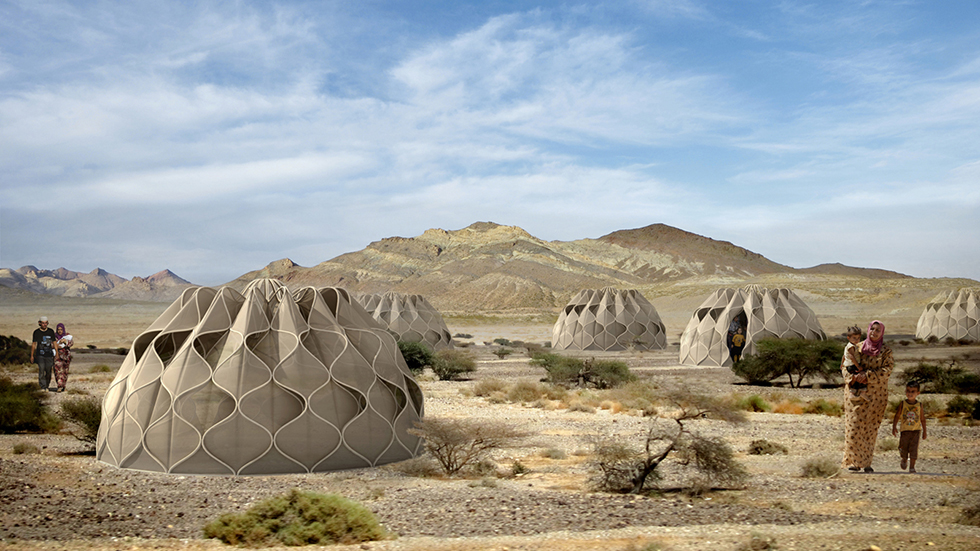 Architect and inventor Abeer Seikaly created an incredible solar-powered, water collecting tent when she set out to design low-cost shelters for refugees. Made from weatherproof solar fabric and weaved into a design that maximises air flow, the Structural Fabric Weaves Tent provides protection from the elements in hot and cold climates. The weaved walls allow rainwater to be collected constantly and the solar fabric generates enough power to charge batteries or to light up the tent.

Simple yet ingenious, the Skylock stores enough power to last a week after just an hour of charging. Bluetooth enabled, the Skylock can be unlocked with your phone, and it features various security features such as warnings and alerts if your bike is being tampered with.

Husqvarna’s Automower Solar Hybrid mows your lawn without needing human input. Partly powered by solar energy, the mower automatically switches to solar power if it is sunny and runs on a rechargeable battery when sunlight is unavailable. The mower also features anti-theft functions, a timer, and a PIN lock, and it is smart enough to alert you via text if there are any issues. When it needs recharging, the Automower returns to its recharging station and activates the recharge process.

Solar cookers are an ideal product for those who spend a lot of time outdoors. In sunny weather, the GoSun Sport Solar Oven cooks a meal in 20 minutes. Rather than using solar panels and batteries, these cookers are relatively low tech and feature wing-like metallic designs to concentrate solar power into a tube-shaped cooking container or oven.

Portable solar chargers are common enough, but rollable solar cells are a fresh and exciting product that combine mobility and durability. Brunton’s SolarRoll Flexible Solar Module is made from extremely thin solar cells and generates up to 9 watts of power. The product can be rolled up to fit into small spaces, and it can be used simultaneously to power multiple gadgets with the right cables.

What Our Client's Say

Good Morning, Extremely pleased by our install yesterday, the new system was already out performing our 1.5kW Origin system even before midday and it's facing west while the Origin system faces North.

I thought you'd like to know that we have just received our first full quarter electricity bill after installation of the system and to our great surprise and pleasure, the value of the solar power input significantly exceeded the cost of the electricity we have used and if it goes on like this we should get a cheque from AGL in November. One very pleased customer!